The Art of Naomi Bradford

A Walk in Beauty 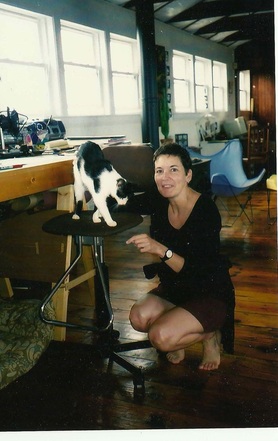 Naomi at her N. Harwich Studio, Photo: Liz Prescott
“Life is a tapestry woven together by humanity. Within this framework each of us is a thread with a common goal to ensure that we preserve our environment.”   January, 2000

Naomi had a creative talent that drew from a deep well of inspiration - the human form, nature, found objects, horses, the sea, ancient mythologies and stories. With paint, pen, fabric, gems, precious metals, totems and a good eye for design, beautiful objects emerged in what seemed an effortless fashion...a genuine soulfulness that nourishes the eye and the heart.

This creative spirit was a common thread throughout Naomi’s life and encompassed not only the visual arts, but music and even smidge of acting as well.  In her late teens, she picked up the guitar, mandolin and stand-up bass to perform with a Bluegrass band at festivals in the heart of Bluegrass Country – a brave thing for a Yankee…

She also had a walk-on part in the film Alice’s Restaurant when it was filmed in her home area of western Massachusetts.  She earned a nice tab for art supplies at the local Pittsfield art store in exchange for her sweet countenance lighting up the big screen.

More recently, Naomi composed a piece entitled Pas de Deux, featuring her performance on the Hohner Echo Harp which grew from improv sessions with her partner Gregg Harper.  She performed this piece live with him at several venues in Cincinnati, OH and a recording of it appears on Gregg’s album of the same title released in 2014.

The primary focus of her life, however, would be visual media, with an interest in Wearable Art and Fine Art forms.

She lived in Worchester, MA for a period where she pursued her love of ceramics and weaving while restoring a home, working at UMass Medical Center and nurturing the spirit and evident talents of a then, very young and stead-fast friend, Liz Prescott. 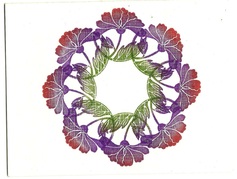 Naomi Bradford/Sweetwater Stampworks, c. 1987
Naomi had been a textile designer since graduating from the University of Massachusetts/Amherst with a degree in fine art, textile design and business in 1986. There she had to good fortune to study with the late Prof. Femi Richards at New Africa House, whom also allowed her to take on some teaching responsibilities,. After graduating Naomi developed and distributed her Sweetwater Stampworks rubber stamp images and notecards. With a background in screen-printing processes as well as hand painted textiles, she taught Studio Art in Textile Design at the University of Massachusetts/Amherst, and later at the Seattle Art Museum, Washington, and the Cape Museum of Fine Arts, Cape Cod, Massachusetts.
​
In the early 1990's Naomi accepted a position with Cerulean Blue which took her to Seattle and immersed her in the world of natural and environmentally friendly textile dyes.  This experience put her in contact with many artists and university art faculty across the United States. 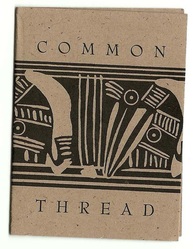 Common Thread Product Card, 1999
Naomi returned to Massachusetts and started her business – Common Thread - in 1998, which was an idea conceived during her studies at UMass Amherst.  This was the focus of her new studio space in a former cranberry sifting warehouse in North Harwich, MA, where she designed and produced professionally finished ties, scarves and vests from her hand-painted/stamped silk yardage.

In the fall of 1999, Naomi traveled to Florence, Italy for a cooking school (another love of hers) and while there, happened upon Passamaneria Toscana.  There she discovered a trove of inspiration - the rich tradition of Italian textile design – and this experience would influence her business direction when she returned home.  Her product focus quickly shifted toward designing / producing one-of-a-kind handbags with tapestry yardage she found in New York City and guidance from her friend Cathy Enos.

Her painting and stamping of fabric continued as well.  About this time, Naomi befriended a long admired textile artist – Betty Gurrier - and the regular creating sessions that resulted with Betty and several other friends inspired the use of a sewing machine in new ways.  Now, even pieces of her painted paper began to be run under the needle with other found materials creating new quilt or trapunto-like collages for note cards and artist books.

Naomi’s studio was across the hall from the studio of painter Paul Schulenberg.  Between the two of them, figure drawing sessions were initiated that turned into a weekly gathering of regional artists.

With that new energy about her, Naomi began to rediscover her early love of painting with a series of subjects, mostly figures, rendered in a bright stained glass-like approach.  She had been experimenting with different methods of color layering and re-exposure using various forms of acrylic pigments, and always on paper.

Naomi then became fully engaged with her painting when, after a move to Cincinnati, OH, she met a carriage horse named Henry on the city streets in 2005.  This inspired the Spirit Riders series of paintings.   From this series, 17 pieces were reproduced in archival, giclee prints in limited, signed and numbered editions.

“I layer color upon color, using the image of the horse as it is my belief that we are part horse/part human … a strong connection between life and spirit … a universal theme of liveliness, strength, beauty, and loyalty. “  2006

Beginning in 2004, the subject matter of her paintings  also began to explore the physical and emotional aspects of her fight with breast cancer.  These are portrait-like images of women called “The Healers”.  The reawakening of her painting, the horse-human relationship and her understanding of the fragility of life were being explored as well in a series of writings that she began to illustrate with painted and drawn images.  Who’s Looking at Whom and Henry and Emma are two of these pieces.

So began my idea to paint again. And horses took over for me, driven by them, to paint them, to make them colorful and full of life and energy… a renewal of energy and an attempt to rekindle my own spirit of well-being.”  Henry and Emma, 2007

Throughout her life, Naomi also worked in other media; collage/assemblage, artist books, art postcards, photography as well as the original rubber-stamp image note cards.   Her later jewelry designs, using components such as glass beads, Thai fresh water pearls, lava, ceramic Miki Moto faux pearls, brass, pewter and sterling silver, have been collected by her patrons for over a decade.  Her jewelry design was nurtured by her dear friend Grace Rizk, who also provided Naomi with access to a myriad source of  rare components.

Thirteen of her artworks are now in the public collections of the institutions that were important to her career as an artist: Behringer-Crawford Museum, Covington, KY; Cahoon Museum of American Art, Cotuit, MA; Cape Cod Museum of Art, Dennis, MA; and, University of Massachusetts/New Africa House, Amherst, MA.

She was a member of the Surface Design Association and Society of Cape Cod Craftsmen, and the co-founder of Museo Gallery in Yarmouth Port, MA and River Street Studio in Sandwich Village, MA.